Choosing an inverter for a utility-scale solar farm

The 10 most important considerations

1: What is the expected power rating of the solar plant?

As simple as this sounds, understanding your generation requirements are fundamental to making nearly all the key decisions. It will assist in determining the most suitable topology of inverter, the necessary layout of the PV arrays, the configuration of the inverters required to convert the DC to AC, what your network connection will look like, and the commercial returns of the system.

Many PV systems are designed to produce the maximum power rating of the inverter at periods of lower irradiation, such as the shoulder of peak irradiation. The decision to have a high DC/AC ratio is intentional, as the generator wants to make maximum power through this period, typically driven by commercial decisions around the price of power at these times of the day. When peak generation is achieved, additional power is clipped. Many system designers are now looking at diverting that clipped energy, which was lost, and storing it in batteries to be released at other times of the day (refer to the point below on connecting batteries to the system).

Initially, systems with a DC/AC ratio of 1.1 to 1.3 times were common, but now we are seeing some systems utilise a DC/AC ratio of up to 1.7 times. The HEMK inverter with Bus Plus Advance option fitted allows DC/AC ratios up to 2.5 times.

String inverters are a distributed architecture for solar plants. They are small, and each unit converts a much smaller amount of power than a central inverter. For high power solar farms, multiple inverter units need to be installed around the site. They are typically connected in parallel at low voltage, so they need to be supplied from a suitably rated low voltage switchboard. They are then stepped up through a low voltage to medium voltage transformer, if connecting to the medium voltage network. Because there are multiple inverters there is some built-in system ‘redundancy’ in the case of an inverter failure. For high power systems, string inverters tend to be significantly more expensive per kW, in comparison to centralised inverters.

The Power Electronics HEMK centralised inverters are physically much larger than string inverters and can convert more power per unit. They are ideal for high power solar plants, greater than 1500kVA. Multiple PV strings are combined in ‘combiner boxes’ in the field, and up to 40 of these combined circuits are taken back to the centralised inverter, at voltage levels up to 1500VDC. The DC is inverted back to AC by up to four inverter modules within the HEMK, then stepped up to the medium voltage network by a medium voltage transformer mounted on the same skid as the inverter. Redundancy is achieved by having multiple inverter modules within the HEMK. The firmware will also optimise the number of inverter modules running to provide the utmost efficiency and maximum yield. Installation is very simple and there is no additional low voltage switchboard or equipment required, resulting in a much lower cost per kW to install.

4: How do I locate and mount a centralised inverter?

Location of a centralised inverter, with respect to the PV arrays, is a very important consideration. The ideal install sees the centralised inverter in the centre of the PV arrays that are being connected to it. This ensures that you have the minimum length cable runs between the combiner boxes and the inverter DC inputs. There must also be consideration given to where the cabling for the MV network connection is located.

As for mounting, one of the great features of the Power Electronics HEMK centralised inverter series is that it is skid mounted. The inverter and transformer arrive on two separate galvanised steel skids that are lifted into place separately and then bolted together on site. Each lift is in the order of six or seven tons. It is common for the inverter skid and MV transformer skid to be mounted on either piles (steel or concrete) or a concrete slab. Full civil drawings are available detailing either the pile or concrete slab foundations. The other great feature of the Power Electronics MV skid is that it can be supplied with a 100% oil containment tray. Alternatively, the MV transformer can be supplied with biodegradable Ester oil.

A real advantage of the skid mount system is that should the inverter be required to move, for example if the solar field is on leased land and the lease expires, that inverter can be picked up and easily moved elsewhere. 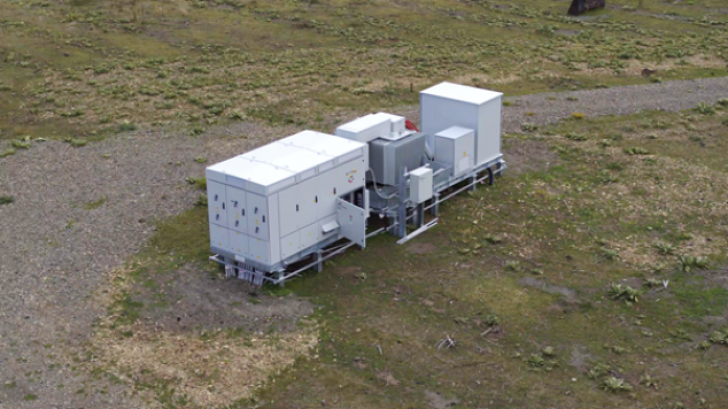 5: Is there a requirement to provide reactive power to the network?

The easiest way to describe how the inverter achieves this, is that it exchanges VARs with the network. It does not consume energy from the PV array to do it (with the exception of some small inverter losses) but it does consume capacity of the inverter hardware.

The Power Electronics HEMK inverter has several ways of generating KVAR. As a standalone inverter the firmware allows for a Q/V algorithm to be programmed. This simply adds steps of KVAR based on the supply voltage. For more advanced KVAR algorithms the introduction of a PPC allows for closed loop Q/V algorithms, or the introduction of a setpoint of KVAR via the network SCADA system.

At night-time up to 87% of the HEMK inverter rating can be used to provide network support.

6: Is there a future requirement to connect batteries to the system?

With any large project it’s always important to have one eye on the future. The uptake of renewable energy is increasing rapidly, and there is already a lot of talk that the next step will be to supplement the energy produced from PV during the day with batteries to supply the network at night-time, or during peak periods. Alternatively, many customers are looking at ‘clipping’ to store excess energy generated from the PV array to be released at a later time. A little bit of consideration now can future-proof you, should battery energy storage systems (BESS) become a requirement going forward.

The Power Electronics HEMK inverter series have the ability to connect a BESS into the existing hardware. The connection between the HEMK and BESS is undertaken via a DC/DC converter. As standard 20% (Bus Plus Basic: 8 DC/DC input and up to 32 PV inputs) of the PV DC inputs can be configured as battery inputs into the inverter. If a higher level of battery input is required, an optional cabinet can be fitted to allow access to more DC inputs (Bus Plus Advanced: 16 DC/DC inputs and up to 40 PV inputs).

7: What is the voltage rating at the network connection point?

No surprises here – this is a critical point to understand from many perspectives. From an inverter perspective this dictates the entire design and construction of the MV transformer and skid.

8: How do I get the best power density in a centralised inverter?

The easiest way to do this for any given inverter footprint is to choose an inverter with a high operating DC bus voltage. The HEMK series of inverters operate with a DC bus voltage of up to 1500VDC. The PV panels are configured in series to form 1500VDC strings which then are connected in parallel with other 1500VDC strings. These are combined into one circuit, then connected to one of the DC inputs in the HEMK inverter. This offers the optimum efficiency whilst operating within voltage ratings of other equipment, for example cables.

9: What kind of protections systems should my solar inverter offer?

Given that you will be connecting to the medium voltage network, it’s imperative to consider system protections. Obviously, the inverter is generating power to distribute along the network. That power must be within the network company’s specification so they can be sure there will be no negative impact to consumers on their network.  It’s also important to be able to automatically disconnect the solar inverter in the event of the network if the grid becomes disconnected.

The Power Electronics HEMK inverter and MV skid contains many levels of protection, both at firmware and hardware level. Some of the key protection features are:

10: What tools are available to assist with design and modelling?

There are some basic details that every inverter supplier should be able to provide you to assist with initial design and modelling. To support the inverter and MV skid, Power Electronics make available a PQ curve and Cos φ versus minimum DC voltage curves. DigSilent, PSCAD and PVsyst files are available for every model.

There is also a wealth of application notes providing details on areas such as inverter grid support capabilities, anti-islanding algorithms, protection systems, and power ratios to name but a few.

For further information or to discuss your requirements, get in touch.