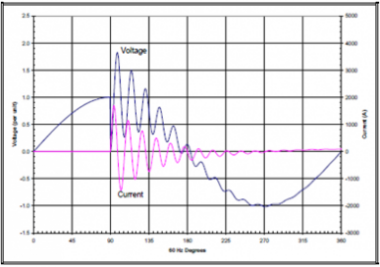 In our third and final article in our Power Factor Correction series we will delve into the effects of voltage transients and resonance on traditional power factor systems.

We often think voltage transients are limited to momentary peak voltage that come via the network or a high voltage spike that has occurred following an event on site. This is not always the case. Capacitor based power factor systems are also responsible for generating significant voltage transients – simply by the staging in and out of capacitors.

Traditional power factor control systems use a very simple philosophy for adding and removing correction to the system. A PF controller measures the power factor then dynamically adds and removes system capacitance by staging in a number of contactors with a fixed capacitor connected to each one to meet as closely as possible the PF setpoint. To provide some fine tuning a half step of capacitance (smaller capacitor of half the main capacitor value) is often added to the system.

The physical act of switching of these contactors in and out can have a massive impact on capacitor life and can create transients on the supply. On initial application of voltage to a de-energised capacitor, the capacitors appears momentarily as a short circuit with almost no impedance. This results in a high current inrush followed by a high voltage transient until the capacitor reaches full charge and impedance. 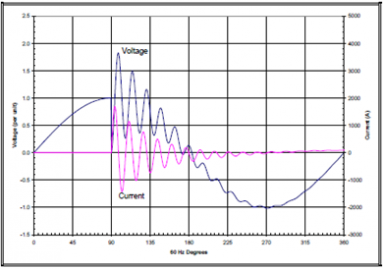 Caption - Voltage transients and inrush current levels on a capacitor.

An inverter based Static Var Generator is infinitely variable within its own rating. As there are no correction “stages” there is no requirement for switching or AC capacitors so hence no associated voltage transients. This technology completely eliminates the risk of self-generated transient voltage damage.

Harmonic Resonance – An ever growing issue

Non-linear loads in a power distribution system create harmonic currents that flow throughout the power system. The inductive reactance of that power system increases and the capacitive reactance decreases as the frequency increases, or as the harmonic order increases. At a given harmonic frequency in any system where a capacitor exists, there will be a point where the inductive and capacitive reactances are equal. This point, called the parallel resonant point, is where the power system has coincidental similarity of system impedances (XL = XC). Every system with a capacitor has a parallel resonant point.

When resonance occurs the result is extremely high voltage and current flowing at that resonant frequency. Power factor correction capacitors act as a low impedance device to these resonant currents and simply try to “absorb” them, overloading the capacitor and causing either premature or catastrophic failure.

With a traditional capacitor based power factor system, engineering this issue out or even identifying this, is very difficult as there are so many site specific variables. Resonance may only occur when a specific combination of non-linear loads and power factor correction capacitors are operating. To make this even more complicated modern metallised polypropelene capacitors are “self-healing”. That is, they are designed to continue to repair themselves and continue to operate after damage to the di-electric. The problem with this is that the capacitance value of the capacitor changes when this occurs, so PF correction can be compromised and the system resonant tuning point has shifted. 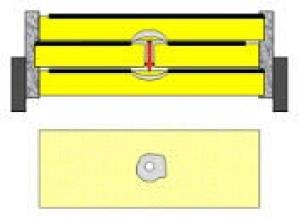 Caption - A simplified cross-section diagram of self-healing capacitor after a short-circuit between the metallized electrodes. Lower diagram shows top view of foil after the short circuit. The capacitor has self healed but the capacitance is now different

An inverter based StaticVar generator does not use AC capacitors to introduce leading kVAR so hence the risk of resonance caused by your power factor equipment is completely eliminated.

Inverter based Static Var Generators, like the Sinexcel SVG, has proven to be the greatest improvement in power factor correction technology for the past 50 years. The precise correction make it the perfect solution for sites with a shifting power factor target. The dynamic response means that it is possible to correct power factor on sites where rapidly changing power factor has meant this has been impossible in the past. The removal of AC capacitors and electromechanical switching devices removes the risk of premature failure caused by voltage transients and system resonance. The Sinexcel SVG is the power factor technology of tomorrow, available today.