Harmonics - What should my Variable Speed Drive have?

The installation of increased numbers of non-linear load devices, such as variable speed drives, onto electrical networks that are at, or above capacity has seen a rapid increase in interest of the harmonic performance of these devices.

Up until recently harmonics has been an area that has been considered “out of sight so out of mind” thus many variable speed drive (VSD) manufacturers have adopted this same philosophy in the specification of their products from a harmonic mitigation perspective. There is no doubt that all variable speed drives draw harmonic currents from the supply. The magnitude and effect of these currents is dependent on drive and system design, and the strength of the electrical network. This current is referred to as the Total Harmonic Current Distortion or THDi. Harmonic current is real current that is drawn from the supply, at frequencies other than the fundamental which in NZ is 50Hz, but does not deliver real power. It does however overload supply cables and connections, protection devices such as circuit breakers and fuses, heating in transformers and motors, and distortion of the voltage waveform.

This article is aimed at highlighting the pros and cons of the most common forms of mitigation that are incorporated into VSDs as standard -  DC bus chokes or three phase line reactors. It is recognised that a DC bus choke or three phase line choke with about 3% impedance offers the optimum performance. A lower value of choke, for example 2%, will not reduce the harmonic currents sufficiently. A higher value of choke, for example 5%, will result in too higher level of voltage drop within the VSD.

To give a benchmark that relates to the real world, a standard VSD (6 pulse), with no harmonic mitigation fitted, can have a total THDi in excess of 180%, this translates to an RMS current of 205% of the VSDs rated 50Hz input current. As you can see this additional current is significant and if not managed can cause the problems described above.

The introduction of a choke with the correct impedance into the DC bus results in a significant reduction of harmonic currents. A choke of 3% impedance will reduce the THDi to around 40%. This translates to an RMS current of approximately 106% of the VSDs rated 50Hz input current. Typically the choke is installed in the positive leg of the DC Bus although some manufacturers install a choke in both the positive and negative legs which are each equal to half of the total impedance required.

DC bus chokes are a common solution from manufacturers as only one choke is required so it is very cost effective.  Becasue only one choke is required, it also allows the manufacturer to decrease the VSD footprint, in fact, some manufacturers do not supply the choke as standard but make provision for the connection of the DC bus choke as an option fitted externally of the VSD. This is something to be very wary of when specifying your VSD. DC bus chokes are a common harmonic solution for low power VSDs, where the VSD physical size can be an issue. 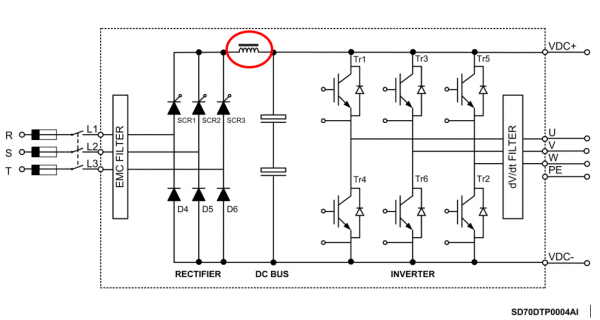 The introduction of a three phase line reactor is an equally effective way of reducing the harmonic currents. A reactor is connected in series with each of the incoming phases on the input side of the VSD. A reactor of 3% impedance will reduce the THDi to around 40%. This translates to an RMS current of approximately 106% of the VSDs rated 50Hz input current.

The three phase line reactor, whilst reducing harmonic currents, also affords significant protection to the VSD. The reactors protect the drive from voltage transients on the power supply and are particularly effective in protection from current surges such as those that can occur when power factor capacitors are switched on. The other major advantage of a line reactor is that there is a fixed impedance on the front end of the VSD. In the event of a ground fault or short circuit the chokes limit the rate of rise and maximum prospective value of fault current. In combination with correctly sized semi-conductor fuses this is the best protection for the VSD.

The dissadvantge of line reactors is that they drop voltage across them. It is important to limit the impedence to limit volt drop that could negatively impact motor performance. Advanced switching techniques for the IGBTs can help overcome this. 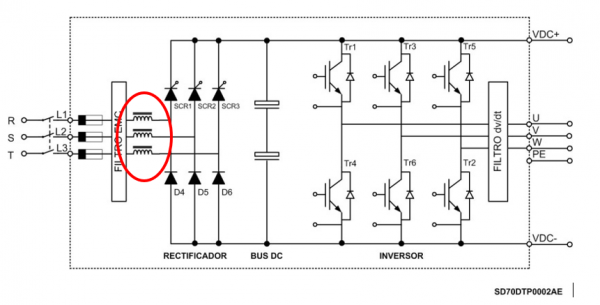 Some special applications require higher levels of harmonic mitigation. For these type applications an “engineered solution” should be considered. This could consist of passive filters, multi-pulse variable speed drives, or low harmonic VSDs, or even active harmonic filters.

Power Electronics offers a variety of products and all options for harmonic mitigation and can help with engineering support for all your product requirements.

Get in touch to find out more.